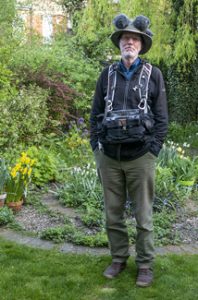 Can you describe where you are while writing this and what you can see from your window?

I live in Newcastle upon Tyne in a Victorian terraced house just north of ‘The Town Moor’. I tend to move around the house as I work and at the moment am writing this on a laptop sat in an armchair in the front room looking out onto the front garden. Thanks to a silver birch and a rowan but mainly a willow, the other side of the road is hidden behind a curtain of green. There are cut-flower tulips in the window, and geraniums in the window box.

What and who is the 'driving' force or major influence for your work?

My work uses sound and text to explore time, distance and my own movement through the landscape by (usually solitary) walking. Pace, tempo and duration are important considerations in how I think about creating and presenting my works. So … as a solitary walker, I take enduring inspiration from the works of Hamish Fulton and Richard Long. My text works usually take the form of poetry and I instinctively distill what I observe, and what I want to say, into haiku and haibun, and so Matsuo Basho is a important and direct influence. Also an influence from the manner of his practice, though not so much his content, is Wordsworth; two other writers I return to are John Clare and Kathleen Jamie. For my sound works I have a much broader range of influences that span sound art, field recording and experimental music - Luc Ferrari, John Cage, Anya Lockwood, Jana Winderen, Steve Reich - this list could be a lot longer … and different on a different day … 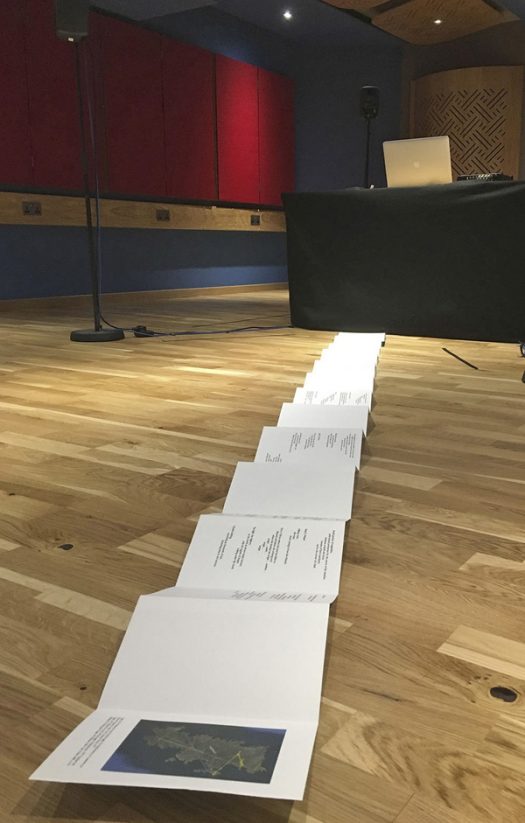 What is your chosen medium for recording your Landlinks work?

For my Landlinks work, as for most of my work, I used a combination of field-recorded sound and text. The field recording is a quadrophonic recording of the duration of the walking/standing and the text comes from contemporaneous notes. At the moment this is translated into a stereo recording and a body of web-based text but, inside my head, it lends itself to something much more tangible both sonically and as a “written text”. It is inevitable that I will go back to this all at some point in the future and further compose with it.

You work in a variety of different mediums...and working methodologies may differ. How important is research and experimentation to your work and can you outline some of your working processes for us?

I am just past the halfway point of a part time practice-based PhD in Fine Art and I find that pretty much everything I do is “practice-based” research.
On a practical level I work with a high quality, relatively light sound recorder and a high capacity lithium ion battery which will power four phantom powered microphones for up to 12 hours of walking - this is then all inside, or slung from, a rucksack. The microphones are usually mounted (with wind protection) around the crown of a broad brimmed hat so that my arms and hands are free. This rig took eight years of experimentation to get to. Text is a notebook and a pencil - with notes made contemporaneously or immediately after a walk.
Much of my practice is based on the exploration of ideas - and how well I can make them real. So … the sound is often the driving interest - I may be doing a replicated walk - the same route at repeated intervals such as 3-hourly for 24 hours or once a month for a year - and these lend themselves to multichannel installations. But having done this the sound files and the text often sit for several months whilst the ideas distill, before I move to compose from them. Even then, composition is a researching process rather than a unitary act. What I end up with may be several steps on from what I thought I was aiming for at the start of a composing round.
Given my interests in time and duration my works tend to be quite long - for example, they have emerged as eight-hour performances and 24 hour works for radio - and these are demanding of an audience. The text works tend to be more accessible; they are again long, but this time in a physical sense - they are often made as long thin (concertina fold) books or text lines - a three metre book or a 20 metre text line would not be unusual. Also, they are often displayed on the floor so that an audience has to move/walk (albeit on a much more limited scale) to engage with them.

Can you talk a bit about walking and the importance of walking in/to your work?

I have always done a substantial amount of my work out of doors and outside is where I find inspiration. For me walking is the way that I, as a single human, experience and interact with the world and the physical act of walking is central to my practice. Walking, as a solitary male individual, has its own rhythms and is a light way of treading on the earth; it takes time, it unfolds over time, and thus requires its own time - it can’t be done too quickly - walk too fast and you are jogging … then running.

What do you think about when walking?

At the start of a walk there are often a wide range of thoughts milling around and it can take a little while for this to all settled down - and they can return at any time. As I get going, I am thinking about the route - either because I don't know the way and am navigating, or because I do and am building a picture of where I am in relation to everywhere else. These “pictures” are not straight forward to describe - they are multi-sensate, sound is a prominent part of them, as is touch, as I “see where I am” inside an amorphous, relatively unbounded, shape that stretches in front and behind me - both in space and in time.

You are part of the Landlinks project and the synchronised walk that took place April. We would love to hear your feedback on this networking initiative and your resulting creative response to that walk

I enjoyed the Landlinks project and it had features in common with a series of walks that I had done previously (an example is these from Fair Isle https://martinpeccles.com/sound-works/reels-and-rants/4-reels-for-fair-isle/) . It was these similarities that, in part, decided me on using the Northumberland site that I had used for these walks before (https://martinpeccles.com/sound-works/four-rants-for-the-summer-solstice-after-john-cage-1977/) . This site is somewhere I know well and have been visiting for many years; it has become an imagined island. Because of the Landlinks score, what I ended up doing was different to what I have done previously and so that has added a dimension to the body of work that I have done there.
Whilst it was interesting to think about the shared nature of the activity, that didn’t figure large whilst I was actually walking. I have assumed that the interlinking would come from seeing and thinking about the works once they are presented together - even, at some point, actually meeting some of my fellow artists.

Do you collaborate with other artists or groups? If so who and why?

I do, though given that my walking practice is predicated on solitude, it makes the idea of collaboration less likely and it doesn’t form a large part of my work. However, through my writing I have participated in group writing exercises - to write renga’s. (a genre of Japanese collaborative poetry. ed)

Landscape and the environment are both important areas of creative exploration to you. With current concerns about our environment, how do you see your role as an artist?

Given that no matter what I may intend for a work, it will be read in any number of (different) ways by an audience, I am not inclined to create what I would think of as ‘direct’ messages in my work … so, I guess the simple answer is I see my role as an artist - making works of art that talk about the landscape and the environment as I perceive it. But I work in places that I value and that are important for me and in so doing give them prominence through my work.

Your work takes in many locations, urban and rural. It often references a ‘place’ and obviously influences your creative response. Is there a place that means more to you and why?

There are a number of places that I return to time and again and where I have made various pieces of work - my imaginary island in Northumberland; the north Norfolk coast.
But there are a also a number of places that, whilst I have visited them less frequently, share attributes that are important to me - many of these are islands - some I have only managed to get to once, such as North Rona, others I have visited more often such as the Outer Hebrides. They share elements of remoteness, inaccessibility and the sea … these are the places that I find invigorating to be, and working there is always stimulating.

The Covid 19 is having a massive impact on so many lives. Are you able to say what effect it is having on your working/creative life and what you have planned once Covid 19 retreats?

On the first day of lockdown I undertook to make a fixed duration walk every day. I recorded these and also mapped them and wrote a mesostic with a stem relating to the Covid pandemic. Whilst I concluded that after six weeks, I am now letting this distil before coming back to work with it once more. I was due to spend three weeks on a remote island during May and the lockdown walks allowed me to create a virtual island which I can move on to explore as I would have done the real thing. This is something I can do within the current restrictions; once these are lifted then I need to get back to the places that energise me - this will be close to the sea and somewhere remote …

What are you currently reading?

I have just finished “Sensing the World” by David Le Breton and, as a consequence, have been reading “Eskimo Realities” by Edmund Carpenter. Both are interesting on the subject of how we ‘know our world’.